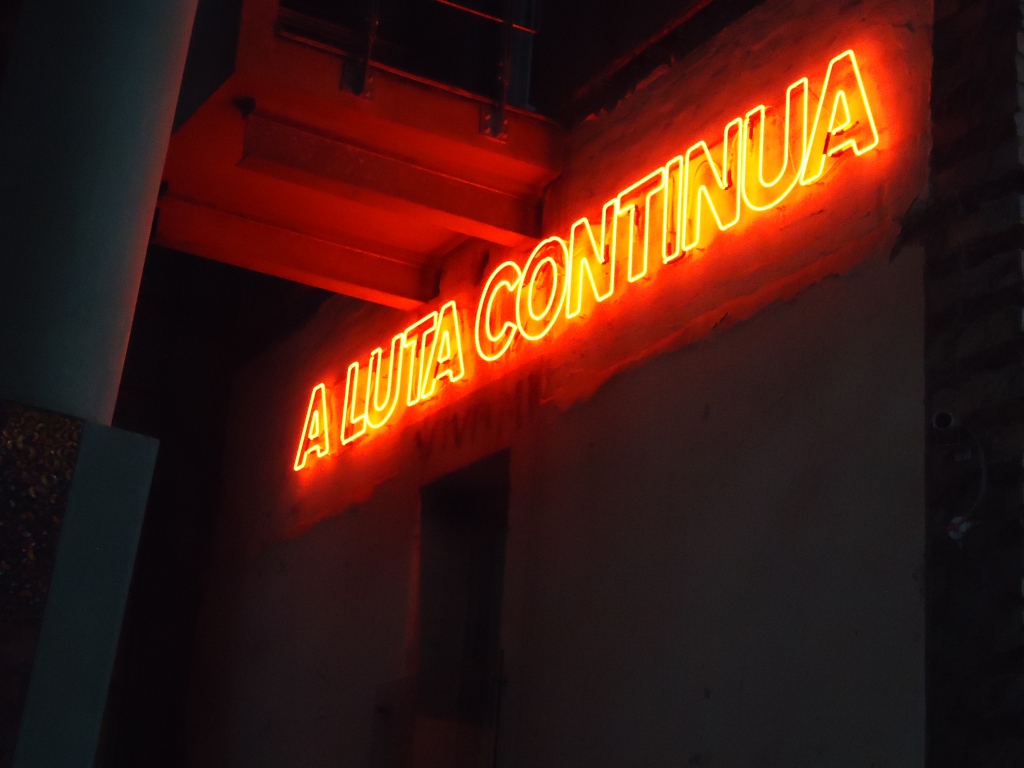 Today was a heavy day. In the morning we visited the Constitutional Court and the Old Fort where prisoners were housed during apartheid and after lunch we visited Apartheid Museum in Gold Reef City. Over the past couple of days we’ve been learning about how law can be an instrument that enables justice and how the Constitution protects different rights, and today was a stark reminder of a time in which the law was used to exclude, punish and oppress non-whites and when there were no protected rights for the majority of South Africa’s people.

Today was my second visit to the Constitutional Court (the first time was an incredible tour that a dear friend set up for us during our wedding week that is still one of my favourite things that I’ve done in Johannesburg thus far) and my first visit to the different jails in the Old Fort Complex. It was difficult to see the different sections of the Old Fort and  to see where and how black men were jailed in solitary and group confinement, to see where white prisoners were housed (admittedly, much nicer areas) and to see the Women’s Jail. Though there are some offices in the Women’s Jail for organizations that work for gender justice, by and large the structures of the Old Fort have remained intact.

What made the tour so powerful was that we had a passionate and knowledgeable tour guide who helped us understand a bit of what the Old Fort was like for its prisoners. Whether it was listening to him and to the audio testimonials in the exhibits, or seeing the buildings or reading the displays, all of it was hard, but it was important to learn how white prisoners were treated very differently from black prisoners and the ways in which this differential treatment manifested in the prison system. Some of these ways included floggings for black prisoners and the use of carefully designed tools used to physically punish prisoners, beyond appalling sanitary conditions (for example thirty minutes was allotted for 2000 black prisoners to shower once a week, which effectively meant people could only shower every three or four months despite doing hard labour all day), daily stripping and violation of prisoners, no toilets for those in solitary confinement, latrines located close to where food was served, poor food and no treats (though at Christmas time white prisoners received a pound of pudding each). The cells of the prisoners who were kept in solitary confinement are still there, and we walked inside the cells, closed the doors and thought about how prisoners were left in their cells for twenty-three hours a day, and how solitary confinement could last from fifteen days to up to a year, with prisoners considered dangerous forced to wear chains. On the back of the doors you can see graffiti done by prisoners at the time, and seeing the cells made the injustice of the place even more tangible.

In the Women’s Jail we saw awful conditions as well and were shocked by how tiny the cells were for black women prisoners. We read stories of sexual violence and of women who asked for solitary confinement as respite from assault, heard and read stories of women who miscarried, learnt about how women did not have access to sanitary products and heard stories/saw signs about children that were born in the prison. We learnt that thousands of children were breastfed in prison. By the time we left the prison, I felt as though I couldn’t hear another story, hear of another oppressive act.

And then we went to the apartheid museum.  Each ticket at the apartheid museum designates you as either White or non-White, and you enter the museum through the entrance that corresponds to your classification. I entered through the White entrance, and in this part of the museum we learnt about the tests used to classify people racially, saw id cards for white people and saw different signs that one would have seen in the apartheid era differentiating what was available to different groups. To enter the museum proper we walked outside on a path that was flanked on one side by a display of stones that was a bar graph representing the death of black mine workers beginning from the discovery of gold in Johannesburg in 1886. Going down the museum steps and entering the museum itself, we began our journey by first watching a film about the beginning of South Africa’s colonization with the arrival of the Dutch, and after the film, we continued our journey through the museum to learn about the history of South Africa pre-colonization until democracy in 1994.

One of the first signs in the museum talks about how diamonds were discovered in Kimberly in 1867 and how that discovery began the destruction of independent chiefdoms and self-governing colonies in what is now known as South Africa. Reading the museum panels and taking in the statistics was overwhelming; each paragraph contained descriptions of so much violence, death and destruction, and we learnt that before the establishment of an Afrikaaner government, there was a great deal of destruction and violence between the English and the Boer people. In the Anglo Boer war for example, the British scorched and destroyed over 30,000 farms. The museum does not obscure history and from the ways the panels are written to the way the rooms are constructed, the details of apartheid are not glossed over. One of the most painful rooms in the museum for example is a room that has 131 nooses, and those nooses represent people who were tortured and then executed for political reasons but whose deaths were reported to be suicides.

Through it all, as we went through the museum and learnt more about the apartheid regime through photography and stories and videos I thought a lot about what it means to hold different colonial histories in your heart and still function. I am familiar of the history of the creation of India and Pakistan and the violence and oppression that characterized the British occupation and the process of fighting for independence as well as the post-independence period, Canada has its own history of violence and suppression of aboriginal populations, and now South Africa is my home. How do you take in and learn another history without being overwhelmed by anger, frustration or sadness? When you hear about brutality and inhumanity, how do you keep your faith in people alive?  What is my own contribution to the country? And what does it mean as a South African to view the museum?   The day left me with a lot of questions and thoughts, and despite the high inequality and poverty that characterizes South Africa today, going through the museum made me feel surprised that South Africa is functioning as well as it is, and that the country managed to transition into democracy in 1994.  I kept thinking about how unusual South Africa is because those who were oppressors in apartheid times are still part of South Africa.  In India and Pakistan for instance the British left, but South Africa is a place in which all the different groups who were part of apartheid South Africa see South Africa as home and still need to co-exist and make post democracy South Africa work.

The museum exhibits also made me think about how sinister urban planning and law can be as tools for social exclusion and harm. Many of the apartheid laws were urban policies and the museum referred to conversations between planners and politicians about how to enable the vision of cities that apartheid leaders regimes sought to actualize. There was a large wall in the museum that had a long list of laws listed, and the “technospeak” used to name laws obscured their violence.  Instead of calling a law “forcible evictions and dispossession of land” for instance, instead it was called the Group Areas Act. Other laws had similarly vague names that hid their meaning.

More later (I have lots of vocab words from this week that I’d like to share), but my final reflection is that it is such an honour and privilege to be part of this programme with such amazing fellows. Today we checked in with one another to see if one another were okay, talked to each other about what was going on, and shared knowledge freely in order to help one another make sense of a lot of information and stories. And from the time we got in the bus different songs were sung that felt uplifting and hopeful but that I didn’t understand at all, and different people during the day explained the context of different songs to me, their current usage, and translated a bit for me and taught me new words. It was such a generous act, and when we were in the Apartheid Museum and saw a film describing the protests of the eighties and heard songs in the film as well, it helped deepen that learning even further. I still have lots to learn  – we covered a lot of names and dates and events and phrases today for instance and God willing I want to read more and look up terms this weekend, but it’s wonderful to be in a group where fellow learners are more than willing to help you learn.