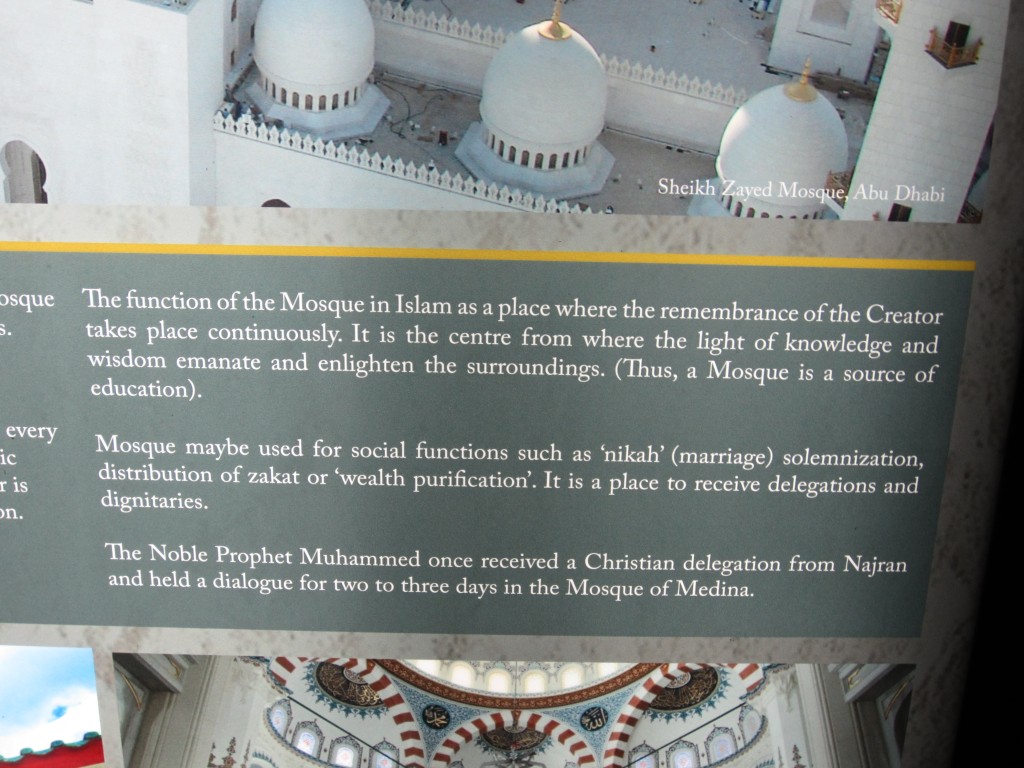 Display at the Sultan Masjid, Singapore.

I’m lost in a book. On the way to work, during lunch, on the way back home, and in every spare moment I can squeeze out of the day, I’ve been reading “In the Footsteps of the Prophet” by Tariq Ramadan, a biography of the Prophet Muhammad (peace and blessings be upon him) that extracts lessons from his life with love, thoughtfulness and careful attention.  It is a spectacular read, and accessible for any audience. Before I reflect on the book in its entirety though (I’m halfway through) I wanted to reflect on a passage I read today that has relevance for how we understand and address contemporary conflicts about the development of mosques.

In building these three mosques, the Prophet was pointing to the importance and centrality of the mosque in the relation to God, to space, and to human communities. The building of a masjid (the place where one prostrates oneself) institutes a specific sacralized space within the primary and essential sacrality of the universe as a whole; as the Prophet said, “The whole world is a masjid, a mosque.” Once built, the mosque becomes the axial space of the Muslim spiritual community in which it is situated, but it also expresses the reality of settlement, of acceptance of the hosting space, which is then turned into a space for oneself, a home. Indeed, the presence of the mosque reveals that a place has been adopted as home, and that the believing conscience is “at home” because the place of worship, a reminder of meaning has been set up. The Prophet’s repeated act is in itself a teaching: whatever the exile or journey, whatever the movement or departure, one must never lose sight of meaning and direction. Mosques tell of meaning, direction and settlement. Yathrib had become Medina. (Ramadan, 2007, p.84) 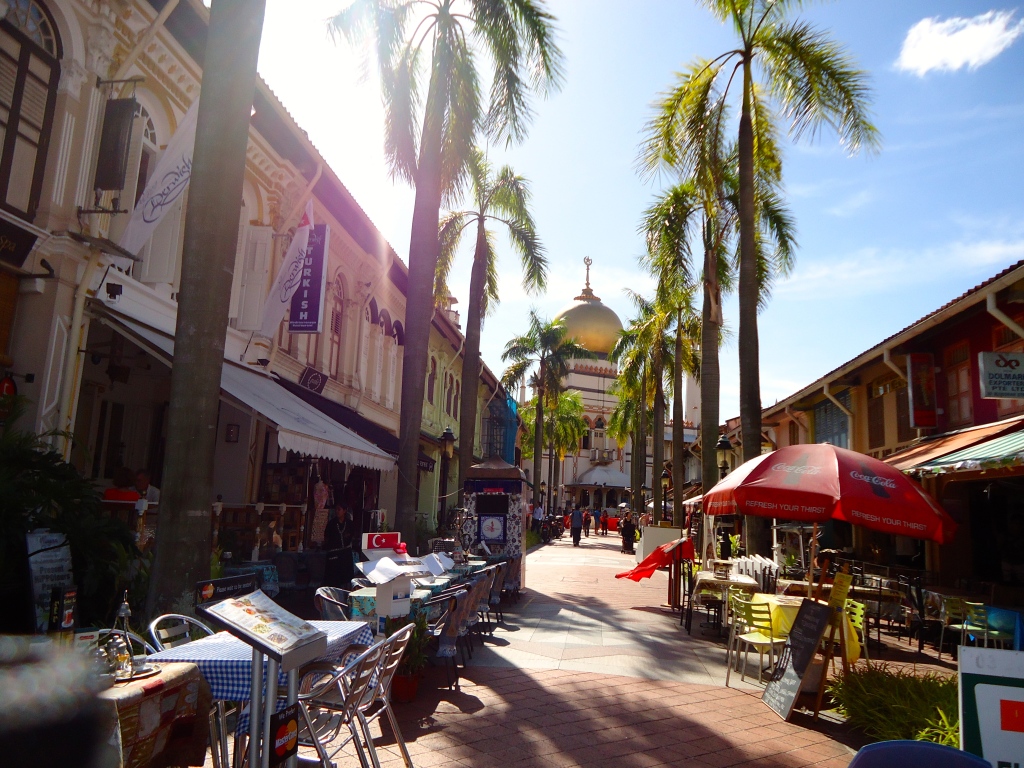 The area around the Sultan Mosque in Singapore is animated by its presence.

When I was studying at the University of Toronto in 2010-2012, my graduate research project was about how urban planners can deconstruct the ideologies and debates that underpin and sustain mosque conflicts in order to recognize when planning discourse is being mobilized to disguise racist and Islamophobic sentiments. This deconstruction is important because scholars working at the intersection of religion and geography have pointed out that mosques as sites are not simply places of worship, they also constitute a particular community asserting their rights to urban space, “constituting themselves as social groups and making themselves present in civic and political space” (Isin and Siemiatycki, 2002, p.195). The production and the placement of the mosque provides a concrete metaphor of the ways that faith groups can actively resist forms of exclusion (Isin and Siemiatycki, 2002) and are sites of insurgent practice (Lamarca, 2010). Insurgent practice is the process of exercising citizenship rights “in invited and created spaces of power” (Lamarca, 2010, p. 79).

Very often when a mosque is opposed in an area, the discourse surrrounding the project suggests that the mosque is evidence of a community isolating itself from the greater city, and that segregation is necessarily bad. Though that association needs to be problematized, here Dr Ramadan reminds us that the development of a mosque is not about alienation, it is about making a place home. The mosques constructed after Muslims migrated from the city of Makkah to the city of Madinah (an event that marks the beginning of the Islamic calendar) were a sign of putting down roots and embracing a new place. They were about setting up “reminders of meaning” .

There are lessons here for those of us who are community builders and planners working at the scale of a city, a university, or an organization. If we know there is faith diversity within the population we work with, we must ask ourselves how that diversity is being expressed. Is there space for the “believing conscience” to be at home? Or do we have a society where  “religion is admitted into these domains on the condition that it take particular forms; when it departs from these forms it confronts a set of regulatory barriers (Mahmood, 2001, p.226). Are certain faiths disadvantaged by the rules of how we plan and designate space in our specific community? It is important to think about how we are enabling or hindering full and meaningful participation of others when they can or cannot access the appropriate faith resources they need.

Furthermore, we should think about the role of faith institutions in broader community development when we reflect on the health/social development of our cities and engage in social planning. Like the first mosques that were axial spaces for their community, faith institutions can be powerful spaces for social and community services. They should be part of the design of our neighbourhoods so that distinctive architecture can be showcased. Moving from conflict to active partnership and engagement, there is much work to be done.

One thought on “Mosques Tell of Meaning, Direction and Settlement”